The shifting tides of moods in MS

Shades of depression
Depression is one of the most prevalent mental health disorders in the general population, and for people with MS, it’s even more common. Dr. Giesser says that about 50 percent of people who have MS will also experience a major depressive episode over their lifetimes. It can range from mild to severe and may occur as a reaction to the disease, or as a symptom of it.

Dr. Kalb points out that “individuals, family members and even healthcare providers often mistakenly assume that anyone with a chronic, unpredictable illness like MS would be depressed. In other words, they think it’s ‘normal’ to feel that way, so it doesn’t get reported and it doesn’t get treated. This means that many people with MS are living with a lot more emotional pain than necessary—which can be as disabling as the physical aspects of the disease.”

But depression doesn’t have to become a part of the MS experience—something Lauren Parrott, 29, of Harper Woods, Mich., discovered after she was diagnosed in 2002. She says depressed moods were triggered each time she became aware of something she could no longer do. “I cry because of my limitations,” she says. “I used to be an avid runner, but it’s not possible for me anymore.” Parrott says she’s learned that focusing on the things she can do, rather than dwelling on what she can’t, helps to reduce her discouragement. “I’ve developed a passion for going on the elliptical trainer. It’s a great cardio workout and I never trip and fall.” What’s more, exercise is often a crucial component of managing depression and most other mood changes that occur in MS, Dr. Miller says.

The medical community agrees that it’s common for feelings of depression to occur as new symptoms arise, but the causes are not fully understood. One theory is that the lesions that occur in MS may affect the parts of the brain involved in emotional regulation, such as the hippocampus—which is just what UCLA researcher Dr. Nancy Sicotte and her colleagues (including Dr. Giesser) found in research they published in the journal Brain in 2008.

“This suggests a structural basis for the depression that people with MS can often experience,” Dr. Giesser says. People who seemed unflappable before their MS diagnosis may be surprised when they experience depressive symptoms.

Elizabeth Pontillo, 31, of Oyster Bay, N.Y., says she began experiencing depressive symptoms before she was officially diagnosed with MS, and thinks that for her, it was associated with the disease. “I do experience definite mood changes—everything in my life seems to be fine, and then I’ll bottom out. It seems like the underlying constant is my MS.” 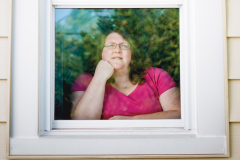 But Pontillo says she’s also experienced a depressed mood during difficult times in her life. “In my most recent round, I was in a job situation I wasn’t happy with, and my husband was going through a major health crisis. It just seemed like nothing was easy.” She’s also become depressed after MS exacerbations. “I start on that downward spiral: ‘What happens if it gets worse? What happens if it affects this body part?’ One exacerbation affected my ability to focus one of my eyes; that’s a problem because I’m a copy editor. I dealt with it, but worried, ‘What if I do lose my vision? What if I can’t drive?’ To be relatively young and have to start thinking about it can be very upsetting.”

The interferon-beta medications that are sometimes used to treat MS may be linked to a greater risk of depression, too, particularly for those who have a history of it. These medications include interferon beta-1b (Betaseron® or Extavia®) and interferon beta-1a (Avonex®). If you’re on one of these treatments, it’s very important to talk to your doctor about any psychological symptoms you’re having, especially persistent feelings of sadness, hopelessness, worthlessness or a lack of interest in the activities that you previously enjoyed. It is also important to tell your doctor about past episodes of depression you or family members have had.

The depression toolkit
Dr. Kalb stresses that people shouldn’t try to just tough it out, or otherwise let depressive symptoms go untreated or ignored. “The risk of suicide is higher among people with MS,” she says, “and the biggest risk factor for suicidal thoughts and actions is untreated depression.” Depression is highly responsive to treatment, and mental health professionals have a number of strategies available for treating it.

The word on psychotherapy

Some studies have shown that cognitive behavioral therapy (CBT), a form of talk therapy that helps people identify their negative thought processes and replace them with more positive ones, can be very effective in treating depressive symptoms in people with MS, according to Dr. Sarah Minden, a psychiatrist at Harvard Medical School. Other talk-based forms of psychotherapy are also effective. Psychotherapy in conjunction with antidepressant medication is generally much more effective than either one alone.

“I’m a firm believer in combined treatments, using multiple modalities,” says Dr. Sarah Minden, a psychiatrist at Harvard Medical School who treats many people with MS. It’s easy to take an antidepressant medication, she says, but it’s essential to meet with a mental health professional at the same time to help you work through the feelings you’re experiencing. “There are times that are extremely stressful and burdensome to people—diagnosis, relapse, using a cane for the first time, or considering a wheelchair. I really urge people to have someone to talk to.” Pontillo has sought treatment—a combination of medications and psychotherapy—each time depressive symptoms showed up for her. Pontillo’s therapist taught her how to reframe her thoughts.

“I tend to be very hard on myself and hold myself to standards that no one else ever would,” she says. “My therapist helped me see that if I wasn’t doing everything 100 percent the way I thought I should, it wasn’t the end of the world. In the last year I’ve learned to give myself a lot more breaks than I used to, and that’s done a lot to help me deal with everyday life, and life with an unpredictable disease.”

Parrott, too, says reframing her attitude about her limitations helped her cope with the psychological challenges they brought, but she adds that talking to people with MS who are similar to you in age or in personal experiences can also be therapeutic. She was diagnosed right before she went off to college, at age 18, and says hiding it from people rather than reaching out made it worse. “I would definitely talk to someone who has MS already, someone who’s similar to you in some way,” she says. Parrott recommends joining local support groups, where you can openly discuss the emotional or psychological changes you’re experiencing (call an MS Navigator at 1-800-344-4867 to find out what’s available near you) or find others with MS facing similar challenges. The Society’s online community, MSconnection.org and its telephone-based support program, MS Friends, are good places to start.